Why the iPad and Proloquo2go is a definite win win

Yesterday Ashley was not her usual self at breakfast not really finishing her toast, which she asked for using prologo2go or interested in other yummy options like berries or yogurt being offered. Since she was so unhappy eating I placed her on the floor with her toys and her iPad.  She got right to work telling mommy and her  brother, what was up she quickly went to the something is wrong, then something hurts message.  Then repeated pressing it until Mommy came right back over and her older observant brother Damon was telling Mom Ashley hurts hurry up.  Both Damon and I didn’t notice right away but we looked her over and her ankle was swollen.  Also present tiny scratch marks and little bug bite.  She had been bitten by a bug and bug bites and her don’t mesh well she was upset and crying.   I don’t know how I missed it when I dressed her just before breakfast either if it was there at the time. But I was very thankful she was able to tell me so effectively this would not have been possible without the ipad and this amazing app!   I would likely have thought she didn’t sleep well she’s constipated who knows what when your child is non verbal sometimes even Moms don’t have the answers which is painful for all involved and very frustrating for my girl at times.   As I see Ashley getting better and better with this new tool. I’m very thankful she has a way to express herself it is such a gift.
She was even trying to bum scoot with her foot in the air to avoid using it. Luckily after some Benadryl and a number of hours her ankle was back to normal. But I was very pleased with my girl, her ipad and amazing app proloquo2go for letting this mom know what was going on.
At a  quick glance it's hard to notice a bug bite if your child isn't pointing it out you.   You can't see it too much in the pictures I took but she was holding it up in the air while bum scooting yesterday.   I'm pretty proud of her for communicating this to her brother and I so effectively. 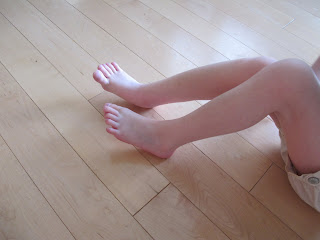 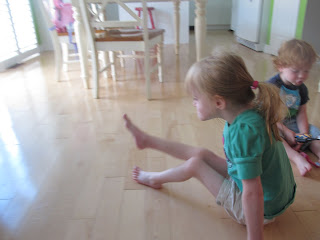 Mission iPossible - is raising funds to put iPads in some other very deserving kids hands so they can communicate just this type of thing or just the fact that despite being non verbal they sure do know their stuff.  So hope on over and read all about their mission too.
Created by Sherry C at 00:45

I can't imagine the frustration Ashley feels when she wants so badly to tell you something and you just don't get it! I am so happy you have found a way for her to communicate!

would be so great if ashley got one of these!

Confessions of a Closet Hoarder but you can call me Judy said...

So. Ignore my comment about the iPad on your most recent post! LOL I should have waited until I read a little bit further!!

It is AWESOME that Ashley was able to tell you what was wrong!! I'm sure she felt so empowered!

Scooter and Hopper loved using their communication device at the doctor's office. First thing they'd ask the nurse was, if they were going to get a shot. LOL I'm really intrigued about using an iPad instead of a big bulky machine. Plus, the machines are several thousand dollars instead of just several hundred!

You've definitely given us something to think about!! Thanks, Sherry! :)