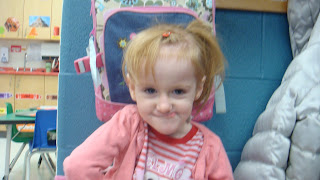 It's mid october and Ashley is adjusting well to JK despite missing a few days due to illness.  Today she received her step by step simple communication device ,  she had a good time with it. Her EA recorded greetings which she used when they visited people along the way to the library. When she pressed the button it said. "Hi, I'm going to the Library".

You can also  pre-record multiply messages  which they did for snack time she used her device to say  " I'm having cookies what are you having Mya?" ,  "And you Sarah"  , What are you eating Anna? and so on.  The girls eating with her responded right away and really enjoyed talking with her.   They wanted to try the button for themselves but Ashley EA explained it was Ashley voice they had their own.   Ashley was very pleased with all of this.

I was also told she loved the smartboard.  Ashley was thrilled to touch it and enjoy the alphabet software they were using to teach her the letters "a" and "s".  They are working on teaching her all the letters of her name.
Created by Sherry C at 15:17

I would love to see her working with this, it is so great.
love
Grammy