Heading home from the NICU Every day in the NICU is a long day there is so much to be concerned about, your childs life is in jeopardy, your dreams have been forever changed and there is little you can do but pray and stand by your newborn babes side. We sang and read to Ashley all the time it was the only way to comfort her when we couldn't pick up your newborn and cuddle them. They also many other sick little ones around and many many worried and devasted parents. I remeber just getting by sometimes minute by minute at time i called one of my friends often to tell her i thought Ashley would be discharged within the week.. she really must of been wondering what i was thinking as i coutinued to tell her that same message week after week until she finally came home from hospital at 7 1/2 weeks old. i couldn't think further ahead then another week.. the idea of being there for many weeks or months wasn't something i could handle at the time.
This is the photo i took as we headed home from the hospital for the very first time ever Ashley was 7 1/2 weeks old that day. She was finally going to see her beautiful home and sweet nursary. She was dressed in a beautiful dress from the gap a very close friend gave her the day she was born. 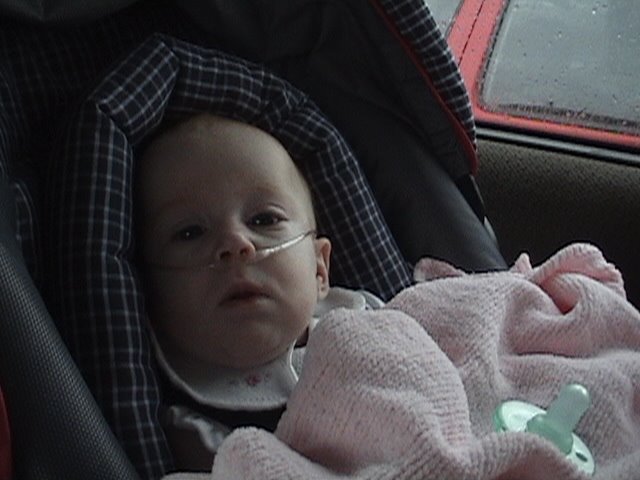 This is my first attempt at documenting the past 2 1/2 years with my three kids and it has certainly been busy to say the least. I have a 7 year old James who is very curious, energic and too smart for his own good if that is possible. A 5 year old that is the most artistic, sweet, caring and loving boy ever. And Ashley my miracle child, she is a total princess and such a blessing. She reminds me daily that i have so much to be thankful for.. starting with her beautiful smile and that opportuntiy to watch her grow and develop. When i was expecting Ashley in 2005 .. i thought most kids were born healthy honestly i was more then a little nieve i have to admit i just didn't know any children with disabilites. I wasn't worried when the doctors thought my baby may be a little small i thought i was having a girl and hey I'm not that big myself even at the age of 33 of course my little girl will be petite. I wasn't worried yet just excited for lay ahead.

My mom and dad had a arrived that weekend Ashley was born it was Easter 2005. I was so happy i showered us presents for our precious little girl, they were so excited for a granddaughter. I remember the fun of opening the little dresses and a cute girly things they had given to me just two days before she was born. I remember feeling excited and carefree ... i don't think i really had much to be really stressed or worry about prior to Ashley being born my boys were beautiful i had a husband i loved and a great job too. I would like to feel excited and carefree again.. i think in time I'll get there. I feel like roller coaster of the last few years isn't really over yet but it is getting smoother with time.
I was feeling pretty lucky to have two amazing boys and very excited to be expecting my third a little girl. At the time I thought for the most part kids were born healthy certainly my kids were anyways. I just truly had no idea how bad it could get for some newborns and unprepared parents. So i certainly was in for a shock when my beautiful little girl Ashley was born March 27th 2005. She had strawberry blond hair and sweet blue eyes and was just 4lbs 9oz and cute as a button.

She was whisked away to the special care nursery as she needed some oxygen. By the next morning she was getting sicker by the minute needing more oxygen and special positioning to maintain her oxygen saturation's the doctors where puzzled as to what was wrong. Her blood gases where taken and the results were alarmed .. she needed to be immeditaly transfered to Sick Childrens Hospital for care.

Just one day old and heading for the Neonatal Intensive Care Unit. We were told they had been called and to wait outside the nursary as they got her ready for transportation. I remember waiting with my husband for what felt like forever .... it took 7 hours to get her ready as she hanging on by a thread we almost lost her a few times that day. We knew they were taking care of her and we certainly didn't want to interput them it was an agonizing wait. We would get breif updates but they weren't the reassuring messages we were hoping and praying for.

The transport team revived her intubated her and finally wisked her away. They were so professional and caring ..they told us she had a big fight ahead of her and be prepared for things to get worse before they get better. Boy that was good advice because we went down that road. At the NICU she was so sick we were told she had sever pulmonary hypertension of a newborn they had no idea and why and if she would make it. I asked the neonatalogist why this happend and he just said it was a mystey.. boy that was scary. Not having really known to many people that were sick... i used to think that doctors had answers . Ashley was just two days old and it was totally heartbreaking to see her .. with all the monitors and IVs she had few trees of IV hooked up to her and was on a occilating ventilator it shock her rapidly puffing air into her lungs to help them expand. She was given a drug that comatized her so she wouldn't move, eat or poo .. all her little body had to do was concentrate on breathing she was just too sick for anything else. She was critically ill there was no denying it.

A week later and things where looking up for a day or two:
The intensive treatment was working.. .she was slowly weaned to a conventional ventator after a few days and taking off the coma drugs so she could move, and even poo. It was so precious to see these changes. This was so emotional for all involved it seems i couldn't image anything worse then what was happening at that time.

9 days old and further trouble .. clots and strokes scary side effects of ICU treatment.
But by 9 days old we learned she had suffered a blood clot in her heart in a very scary place on a valve leading to the lungs. .. the doctors where very worried it was clear and they openly told us that. The schedule an MRI at 9 days old to check her brain to ensure there was no bleeds .. the news was bad they found a bleed we were told she suffered a blood clot and a small stroke (the bleed) they probably occured at the sametime with a small piece of the clot breaking off and causing the stroke. It was in the movement area of the brain but it was just small. The normally always treat clots as they are scary if they move to the brain or lungs can cause serious problems however .. they couldn't treat a clot when they know there is a bleed . The treatment could cause further bleeding in the brain. They had a meeting with many doctors the stroke team, hemotologist, neonataologist.. a number of people where there they decided it was to risky to treat my little girl clot we had to wait ten days and see if the bleed it stable or smaller. It was all so terrifing I remeber being happy we were waiting .. not sure what the worst of to evils treatment or waiting. I was happy and scared to wait.
Created by Sherry C at 22:56 1 comment: