Ashley school created a IEP for Junior Kindergarten, she is working on recognizing the numbers between 1 to 6, the letters in her name.A,S,H,L,E,Y. Recognizing two colours (blue & pink), Shapes (circle, square and triangle) as well as body parts mouth, nose and eyes. She is able to use her eye gaze effectively to makes choice and identify selections. They are reinforcing her choice making by helping to point and touch her choice she needs reminders to do this.

She has been able to identify six farm animals, and the numbers 1 and 2. She gets time working on the smart board where they are focusing on the letters A, S and H this term. She also uses her step by step communicator to talk to her peers at snack time or say hi to classmates. Her biggest challenge has been illness she missed 12 days of school this first term which is a majority of class time since JK is only every second day alternating between 2 day and 3 day weeks.

Here's one of Damon speaking part in Mamma Mia... this was so much fun. 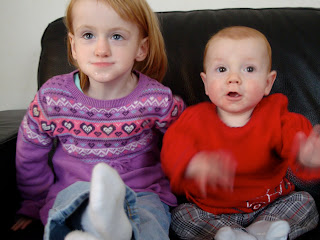 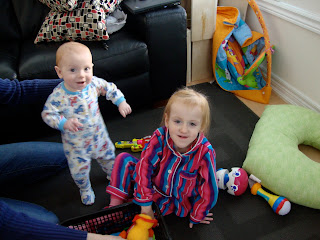 Well lots has happened this week stress level was high when my  first mini crisis happened.  Ashley's mic-key button ballon burst and fell out. That was a first but I guess was bound to happen as she had that one in since fall '08 over a year.  Her nurse was here at the time but she was more stressed  then me .  I calmly went up stairs to find the kit  and instruction booklet.  Which  clearly stated that this was not an emergency in the book.

I guess they put that at the very front of the book as they must know it's a more then a little stressful to see the button and fluids coming out a whole in your child stomach. Perhaps some parents may feel like calling 911 or rushing to emergency.

So stress level were rising, I stay calm and got out her new mic-key button which was on hand followed the instructions and inserted a new one. Then called the g-tube clinic and they said I did everything okay. I just missed cleaning the site with soap and water before inserting the new button.  No big deal she good and getting all her nutrients.  It isn't really a big deal after all.

Two days later while I was driving Ashley to physiotherapy my car started to show it's age.  The front hood popped up in serve wind blocking my view of the road and totally smashing my windshield.  I was alone with Ashley at the time as my parents were in town and they were at home with Taylor.  It was 11 am and there was very little traffic on the four lane road I was on so I just slowed down and pulled off the road.  I don't normally worry to much about charging my phone so I was on the side of the road with a cell phone that was not charged.  I flag down a car and used their cell phone.  Now my van is at a collision repair shop, the front hood needs to be replaced and the windshield. My mini van is 7 1/2 years old so it's seen better days and isn't worth too much at this point it may be a write off.   I'll learn on monday. I'm not really sure I want to be driving around in it any more .  I just had the car pass a safety inspection mid october so my insurance company says they may cover the claim and at they  towed  it and provided me with a Grand Caravan rental for the next few days.

Ashley and James also participate in a schools holiday concert, James class played three songs on the recorder and Ashley class sang three songs it was great.  Ashley was a little overwhelmed but participated. I'll post some clips once I download them.

It's mid december and I'm still working away on my christmas cards  I  have 11 down and 29 to go. Not one gift purchased and I'm out one minivan.

I've been a good girl this year Santa please consider bringing me a new Van. I'm sure your sleigh can handle one of those I'm not fussy just need power sliding doors, working A/C built in DVD would be really nice too, power rear door. I don't ask for much now do I.

As you can see I'm all over the map on this post. my mind is going a mile a minute to.
Created by Sherry C at 23:38 3 comments:


Damon had a role in Mamma Mia a musical they produced at school it was so much fun to watch. This was a ten week lunch program. It concludes tomorrow with a final show. Thursday night was the first production. Here is a short clip he is in the back row far right dancing and singing.

Make an on-line slideshow at www.OneTrueMedia.com
Created by Sherry C at 22:51 1 comment:

No not my girl! 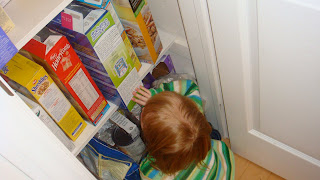 No not my girl  attempting to make a big cereal mess on my kitchen floor.
No not my girl emptying  a kleenex box for fun
No not my girl lifting pots over her head and banging them on the floor.
My oh my the amazing new skills she has and the interest in exploring, dumping and banging everything to Mommy's delight!   I thought Taylor was going to be modeling these things for her in a few months but no she is the leader. 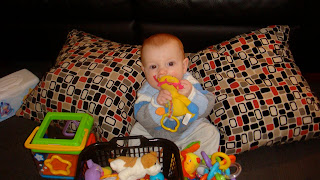 You see for now Taylor is still stationary but his sister is moving right  along.
Created by Sherry C at 09:55 2 comments:

it's starting to look a lot like Christmas everywhere I go 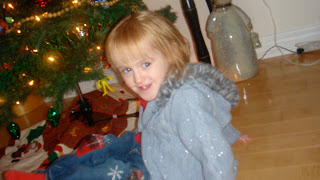 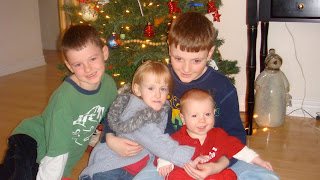 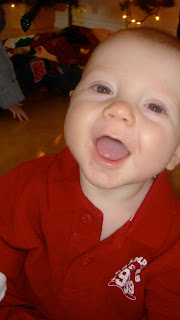 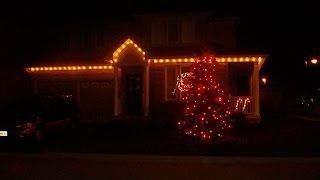 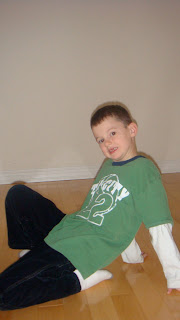 Some pictures from my home photo session with the kids for my christmas cards. That's our house all decked out for the season. My husband spent most of the day saturday and sunday putting up the lights.  I can't believe it's december already where did November go any ways.  I'm far from ready for christmas I have not stepped in a store yet so not a gift is bought.  I have a bigger tree to go up in the family room too. Well at least I've started how about you?  Are you ready for christmas?