And my sweet boys 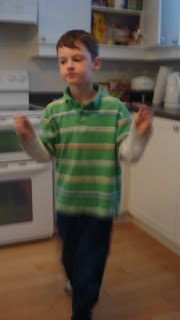 My Damon is always trying to avoid my camera,  here's one photo I managed to get.  He's joined   Act One Productions at school which is a 10 weeks lunch time program.   They are   putting  together a musical production of Mamma Mia.   He loves listening to ABBA so when he heard the school was putting on a musical based on ABBA he came home asking me to sign him up I don't think he realized what he was signing up for at that point, acting singing and dance doesn't really happen around here too much.     After three weeks he had to fill out a form requesting the part he wanted he  initially  asked for a non speaking part but they gave him a small speaking part anyways and I believe he is warming up to it.

He also has to sing in a group for a  few songs.  I'm excited to see the show already.

My littlest babe of course  I can't leave him out he is starting cereal already! 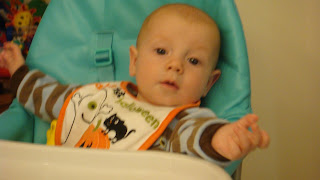 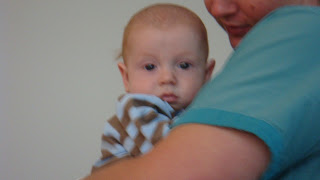 Taylor is eating me out of house and home already in one week he polished off two boxes of baby cereal.  I recall with Ashley having a pantry full of cereal she could never finish a box as she eats so little she would maybe eat a tablespoon or two for a meal.  Taylor  eats 5 or 6 tablespoons and wants more and as an added bonus is sleeping a little better now too.  He is such an angel!

Mamma Mia?? Wow, what a production for a class to take on! My girls LOVE the movie, although I think it is not entirely appropriate for them, I'm tickled that they get into the music. Bethany wants the soudtrack for Christmas!

Taylor is so cute!! He's growing so fast!

Damon I hope I can come to your show. As soon as you know when it is let me know.