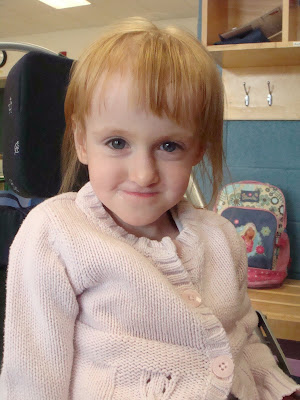 Well Ashley finished her second day, I manged to get her feed, dressed, AFO's and all and arrive at school for 8:30am. Her brothers as well I'm not exactly a fan of getting up early but I managed a timely arrival each day this week. That is an accomplishment for me. I hope I can keep it up.

Ashley had a little trouble for the first part of the morning. From 8:30 until recess she did some crying. She had a walk instead of circle. By the time recess arrived they decided to remove her AFOs and take her for a walk in her stroller. I showed up briefly at recess to tube feed her some milk. She decided to start smiling at that point too. She was happy to be there for the rest of the morning. I was told she sat and listened to the lesson, smiled while doing arts and crafts and sand play. When they told the class Ashley was heading home for the day at lunch a number of her peers came by and caressed her hand or patted her head good bye. Junior Kindergarten last all day 8:30 until 2:50 but were are going to let Ashley slowly ease into it with half days planned for September.

I saw another Junior Kindergartner who looked to be developing typically shedding a few tears at recess so I know Ashley's not alone feeling a little upset.

All in all I think her first week of school was a great one. Her teacher even gave her this certificate which she loved. 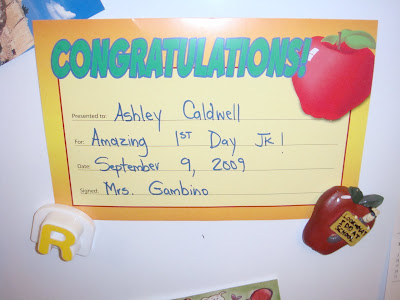 I hate mornings and after a nsty look from her teachere last week after being late for 3 days I am trying to get us out on time. I blame her AFO's and her meds for my lateness but that is a bit of an excuse as they have been around for awhile and I should have adjusted by now. Getting 4 kiddos dressed and fed in the morning is medal worthy.

Sounds like she's doing fantastic Sherry. You've done great things to get her this far, I can't wait to see what other changes and progress she makes :)